Who’s afraid of the wolf ? 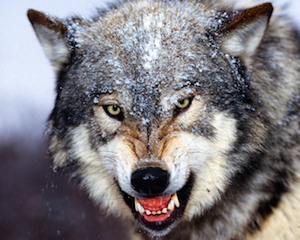 Who’s afraid of the wolf ? Raising questions and bashing up common sense:

ATMF‘s double headed eagle takes an authoritative stand on a “hot” matter in the persons of DM and MF, the two label representatives:

Lately ATMF has faced the censor’s hammer hitting Disiplin both from magazines, webzines and distributors alike. Having received a good number of emails by “scared” people asking if ATMF turned to into a NSBM label, or even more exotic and unlikely deductions based on <<strange comments in ATMF‘s mail-order catalogue>>, we thought that what follows not only can raise some good questions but also could clarify once and for all our positions and views on certain matters. Not to mention a disenchanted stock on extreme music’s current situation.

First thing first: differently from Janus, which was unfairly censored by Terrorizer Magazine on an absolutely “made-up-from-nothing-on-fake-facts” basis some time ago, this time we were absolutely aware that Disiplin would have been heavily censored. Period. No complaints.

We take the situation as it is and we keep marching forward without any hesitation.

Before you start to wonder about Disiplin’s censorship as a stand against certain ideas by distributors and magazines it would be useful to know for you that it has been done on a “economical benefit basis”, NOT ideological.

The most recurrent reply has been that Disiplin wasn’t to be featured and/or distributed because “it wouldn’t be good for business“. Figures. Disiplin has not the selling points of Burzum, right ?

Keep the above fact in mind and we’ll start from there.

Disiplin IS NSBM, we are far beyond any category and standardization. So why release Radikale Randgruppe ?

Absolutely out of the picture: ATMF is an ethic entity with a 0% economical gain sustained by volunteers contributing with their time, energy and skills for free. Everything runs on extremely tight budgets. We adopt the most cost effective solutions possible (comprehending sale prices as well) and funds are intended ONLY and EXCLUSIVELY to fund other releases.

With nowadays sales hitting one thousand copies at best (or two thousand if you’ve a “rockstar” status) per release, in a one-two years timeline, with distributors paying a modest invoice after one year or selling fifty copies at best, certainly “business” is not a word to be applied to this kind of activity.

Said situation applies more or less to EVERY label out there and who tells you differently it’s either lying to mask a “near-to-collapse” scenario or does not even know how things are really going.

A term like “charity work” for all illegal downloaders out there can fit better the whole situation. And yes, the previous sentence is intentional sarcasm.

2) We claim not to be NS and we’re not doing it because of the sales, so why ?

Starting from the fact that for us Radikale Randgruppe is a great piece of art, it is undoubtedly extreme from every point of view. That matters to us a lot. You can support Disiplin’s ideas, you can bash their arguments but you can’t ignore them. Why ? Because whether you like it or not they have something to say, and that is unquestionably disturbing for people that are used to listen to music or enjoy other forms of art that from our point of view can be defined empty, childish and/or harmless at best.

Satanism and satanic iconography are not anymore a “destabilizing” factor in nowadays extreme music but are rather on a “commonly accepted clichés” level. Wasn’t extreme music’s “shocking” thematics and iconography the key factor to reach a wider public  ? And therefore it’s protest against a reality perceived as hypocritical and senseless  its truest and inner meaning ?

So, speaking to those who feel themselves offended by the ideas of Disiplin or another band, instead of questioning us or raising some funny “politically correct” slogans what you should do is to revert your hunger for answers and ask to yourself why you’re listening to “extreme” music and if this really fits you. Maybe what do you want is just to listen to something that seems extreme but in the end is just as harmless as a pet ? An empty can, nothing less – nothing more.

People can’t recognize, auto-indulging on the Christian plague apparent fall, that the same has deeply affected our roots and found a way to persevere in many different forms, detaching from the religious beliefs basis.

An example is the typical hypocrisy we’re facing today and our fight against it, without remorse nor hesitation. Not to mention that’s the main cause of the attitude of the ones actively censoring Disiplin and/or ATMF.

We’re strong supporters of what we like to call the “Burzum pathway of Black Metal” when ATMF is helding its rendez-vous.
From our point of view Burzum has been the point of fracture between an eminently Satanic way to conceive Black Metal (se e.g. Mayhem and their “De Mysteriis Dom Sathanas”).

Satanism and related subjects from our point of view are only contributing to carry on a Christian way to see the world by being part of it and playing the antagonist part. A view of the world we totally reject from the very base.

Then comes the way that Burzum opened up, the one we value the most. A way that if developed further finds its base upon a view of the world and spiritual values absolutely out of the Christian illness. And before someone starts out to cry running possessed by paranoia we’re not speaking about any biological race superiority. Figures. Scientific “truths” come and go, and that one is filling one of many spots available in the graveyard of “theories considered once true” of modern Science.

We’re not scared about our heritage as many other Europeans are, we keep into great consideration our roots. We’re aware that in a world that considers the total loss of identity and mediocrity a value to be imposed, our point of view has to be considered a crime. Then we’re proud to be guilty.

Other than that we certainly have our own ideas about politics but those are part of our private lives and those does not have nothing to do with ATMF and its activity.

Our ideas may even differ from Disiplin’s one but as long as we can share some compatible counter values against the modern world, we will totally support our bands. No distinctions, no exceptions. Even if we don’t agree with our artists ideas, partly or totally.

On a conclusion note to those actively obstacles us:

We take great pride in ATMF’s independency, there are no ransoms or threats effective against us. Due to a strong base of supporters which made us one of the main quality black metal labels around we could continue even without an “official” distribution network and media support without  getting any significant hit. You’d like to stop us. You can’t.

Whether you like, dislike, hate or ignore our activity we won’t change or tremble: we’ll keep on releasing what we think it’s worthy to be supported.

If you want to know if we will release in the future other NS bands the answer is: “if we’ll find it worth to be released, we will.”

To all our former, present and future supporters and contributors:

To YOU goes our deepest gratitude, we don’t need to make any names since you know who you are. Fortis cadere, cedere non potest.

We won’t accept any lesson by a bunch of haughty individuals competing in the contest for “the most normal man on earth”.

If you’re against all of this as much as we’re the ONLY way to support the cause is to buy from our mailorder or our Ebay shop.