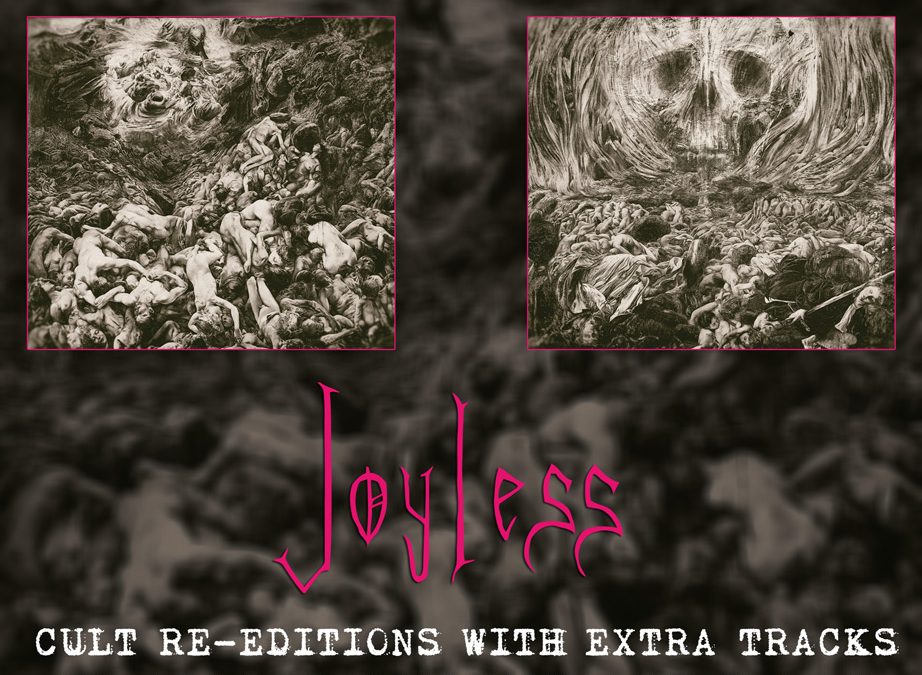 Shortly following the successful re-editions of FORGOTTEN WOODS’ cult albums “As The Wolves gather” and “The Curse of Mankind”, it’s now time to offer the same treatment to the most controversial and innovative project of the Norwegian combo, JOYLESS.

“Unlimited Hate” has been the starting point of the JOYLESS experience. Originally presented in 1997, part of the album was created for FORGOTTEN WOODS and therefore recalls their typical Norwegian black metal rawness, but filtered through new wave & post-rock elements that made this negative piece of art unique.
The cult edition of “Unlimited Hate” includes 3 extra songs that have to be considered, according to Rune Vedaa’s opinion, as the perfect link between the 2 efforts: “Fulfillment and Entity’s Embraced” from the split vs Apokryphus, “Swansmile” and “Room of Velvet Splendour Pt.2” from the “Blue in the Face” 99′ EP.

“Wisdom & Arrogance” is of course the second output of the project, but also the first to show JOYLESS in a comprehensive form, an evolution of the first wild signs that characterized the band’s debut, with songs swifting towards more contaminated negative rock territories.
The album has been indeed an influence on the scene and was released by the young Kvarforth (Shining) via his personal label Selbstmord Services.

Both these albums have become part of the ATMF cult edition series to emphasize their importance in experimenting different forms of hateful and negative music, showing the potential progression that Black Metal would have reached at a later stage, and making of JOYLESS a precursor of that irreverent attitude and creativity later flaunted by bands like Lifelover and Shining.

“Unlimited Hate” and “Widsom & Arrogance” come as luxurious 6-panels CD Digipaks, strictly limited to 500 copies, and are accompanied with a full retrospective and track-by-track commentaries by former member Rune Vedaa.

As for Forgotten Woods those editions are to be considered as the only official ones, approved by the band, printed today.
“Enjoy Joyless, if you can. We shall remain unenthused.”
Rune Vedaa (2018)
Artwork and artistic Direction by Francesco Gemelli.
CULT008 JOYLESS – “Unlimited Hate” bandcamp preview
CULT009 JOYLESS – “Wisdom & Arrogance” bandcamp preview
PREORDERS links are available at our new eshop METAL ODYSSEY made in cooperation with
I, Voidhanger Records:
PREORDER Unlimited Hate
PREORDER Wisdom & Arrogance