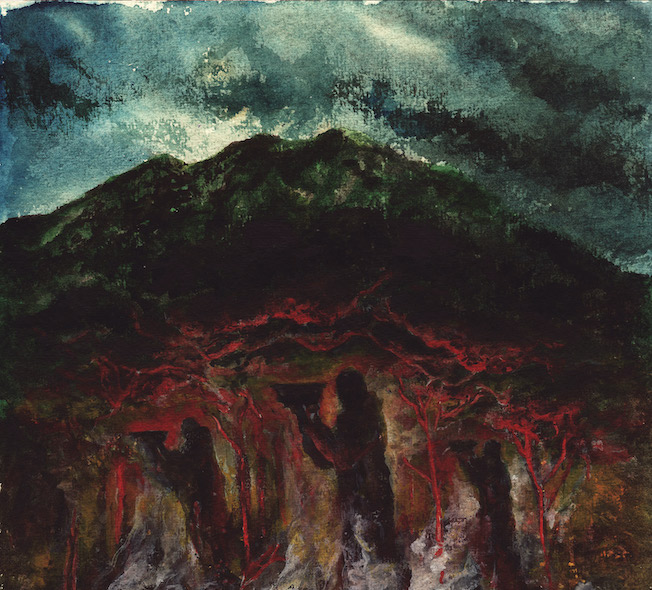 Formed in 2011 and featuring members of Movimento d’ Avanguardia Ermetico, COMANDO PRAETORIO made their public debut with the Divinità terrifiche EP in 2015. Although the interim has seemed quiet, the band have taken to the stage often and have otherwise been finetuning their debut album. At long last, it bears the title Ignee Sacertà Ctonie.

COMANDO PRAETORIO’s Ignee Sacertà Ctonie is a tremendous sonic journey about the chthonic fire cult of Mount Soratte, where ecstatic and wolfish initiatic paths were performed by the Hirpi Sorani, honoring the Inner Sun of Apollo Soratte. Transcending the imminent obscurity, a full-throated voice looms large, storytelling across these four epic-length tracks and representing a deeper understanding of this underworld fire cult, its manifestation brought forth through the wrathful archetypes of extreme music inspiration and spiritualistic sound approach. Indeed, COMANDO PRAETORIO here have shaped their glorification of the forgotten energies, the primeval gods, their vibrant black metal belying grey tones and ominous shading, with cresting-yet-somber guitar lines building a massive wall of doom for the modern man not to overcome. A subtle juxtaposition of extremes, this is, the album’s overt muscularity evading rote aggression for its own sake and instead conveying more profound sensations, a stern austerity that’s custom-built for the strident individualist.

Suitably, this noble achievement has been enriched by cover artwork courtesy of the masterful T. Ketola, who’s shaped Deathspell Omega’s visual side since 2004 and has also done high-profile work for Dissection and Watain, among many others. Gaze into its dread landscape and prepare for your journey into COMANDO PRAETORIO’s Ignee Sacertà Ctonie!