Absentia Lunae: blitzkrieg in Frankfurt and the “Battle of Berlin”

The “In Gloria Solis Atri – European Tour 2011” is over since quite some weeks. As you may already know some individuals wanted to stop Absentia Lunae from playing in Frankfurt, this is an update we got from the band:

We’ve performed a surprise blitzkrieg in Frankfurt, as you may already know they wanted to stop us, they even tried to stop us in Wien, but they ended up defeated: Stehend Begraben.

Here’s the link to the pictures taken at the surprise blitzkrieg: 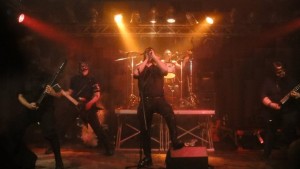 Moreover you can watch the whole battle of Berlin on our YouTube channel: