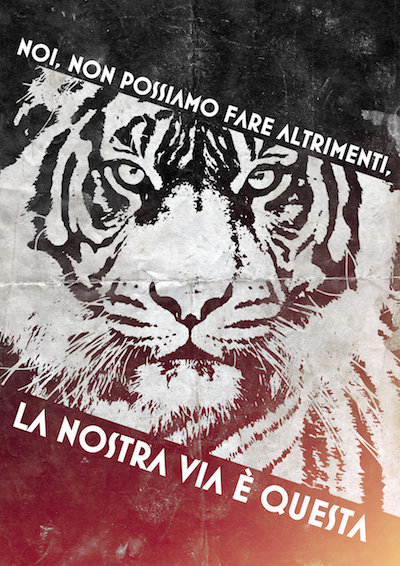 (translation: “We can’t do differently, this is our path”)

The above image is taken from the booklet of the forthcoming new Absentia Lunae’s album called “VORWÄRTS“,

So after Horna, Satanic Warmaster, Janus, Disiplin and many more this time Absentia Lunae has to face the harassing manners of well known individuals, this is what the band has to say:

We’ve been banned from Frankfurt due to the threats received by the organizer of the Welt in Trümmern festival (the closing date of our European tour together with Glorior Belli, Horned Almighty and The One) by antifas. The German Police warned by antifas and Frankfurt’s city council has been forced to issue a ban against us.

Not respecting the ban would mean the cancellation of the festival.
As a matter of respect towards our tour comrades and people attending the show we accept the situation as it is, we will be there but the won’t play. Usually to this kind of news would follow one of those statements that a lot of bands/labels/organizers/individuals issue to try to get rid of those ignorant rioters that antifas are.
If you’re expecting this from us then make yourself comfortable, since you’re going to wait forever.
We feel that we do NOT have to say sorry to or justify ourself with anyone. The contents of our music (both visually and lyrically) are public and anybody with a working brain can understand what Absentia Lunae are about. We lack the capabilities, time and interest to remedy to some short brained individuals with self-evident reading/understanding problems.
From our side we take this with irony since it’s quite funny to see how antifas work very well together with the establishment that they want us to believe they’re against. They’re the most zealous political police of a status quo we consider the enemy. Nothing more than conservative puppets.
Parasites of a rotten system they are, quite different from the proto-revolutionary image they try to get to the outside.
it must be clear that we’re not writing this to make any sort of formal complaint.

Not even bad blood against antifas, since they’re what they’re. We wouldn’t dare, to pretend, they’ll sort out how to use their braincells properly. We take reality as it is and look forward to our goals, fearlessly.

FORTIS CADERE, CEDERE NON POTEST
Who’s obviously losing from all of this is the metal scene, hostage of those external corpses. The liberation from the chains of modernity hasn’t come yet…we have never been fully understood and this hasn’t changed so far.
Our plans are to start recording our new album “VORWÄRTS” after the “IN GLORIA SOLIS ATRI” European tour with Glorior Belli, Horned Almighty and The One.

ABSENTIA LUNAE on the web:

If you’re against all of this as much as we’re the ONLY way to support the cause is to buy from our mailorder or our Ebay shop.